Read the LWVNM recently adopted position on the Administration of Justice.  Click here.

During September and October, 2022, KRWG Public Media will once again partner with the League of Women Voters of Southern NM to televise forums with area candidates running for state representative, county commission, and sheriff.  Moderated by KRWG staff and members of LWVSNM, the forums will be broadcast on Thursdays during the TV22 Newsmakers program at 7pm and on Saturdays at 5pm.  See the schedule:

To celebrate when the 19th Amendment was placed in the U.S. Constitution 102 years ago, the Southern New Mexico Women’s Suffrage Alliance provided an event on August 25 – Women’s Equality Day – for women in the southern end of the county. 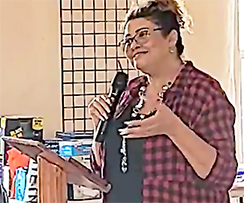 The Alliance is comprised of AAUW-LC, the Doña Ana County NAACP, the League of Women Voters, and the Women’s Intercultural Center (WIC), located in Anthony, NM, under  the leadership of Mary Carter.  Sunland Park Mayor Pro Tempore Olga Nuñez (pictured) gave the audience many critical reasons for why voting is important, while LWVSNM Co-President Eileen VanWie, portraying “Alice Paul,” described events and the torture that suffragists experienced to gain the right to vote in 1920.  WIC Executive Director Mary Carter and her staff had created the fun game La Voteria, which participants enjoyed.

The 19th Amendment theoretically awarded all women the right to vote.  We know voter suppression and sabotage began immediately and continues today.  We need to be vigilant and take action to make democracy and elections work in 2022.

GET PREPARED FOR THE NOVEMBER GENERAL ELECTION

The League of Women Voters of Southern New Mexico encourages all residents to become familiar with three Constitutional Amendments that will be on the Nov. 8, 2022 election ballot.  Click here to read the pros and cons of each Amendment.

Voters can also click on this list which provides voters with the names of the candidates that are running for statewide seats and those who are candidates in Doña Ana County.  Please talk with your friends and family to ensure they are registered to vote.  For assistance with getting registered, visit the VOTE411 website or call the Doña Ana County Clerk’s Office in Las Cruces: 575-647-7428 (575-525-5951 TDD).

THE TIME TO REGISTER TO VOTE IS NOW

The primary election has passed but residents can still register to vote before the General Election in November 2022.  Click on this website which will get you started on getting registered, as long as you live in one of New Mexico’s counties and you’re 18 years of age. The VOTE411.org is a great lo 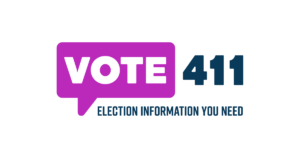 cation to get updated information about the candidates, races, and dates of early voting, absentee voting, and more.

The LWVSNM works with VOTE411 to get answers to League questions from all candidates vying for political seats.  Many of the candidates answered the League’s questions for the Primary Election.  We are hoping to get ALL candidates to answer questions before the General Election.

The Equal Rights Amendment (ERA) needs to be added to the U.S. Constitution now.   Suffragist Alice Paul wrote the amendment in 1923 and got it introduced in Congress.  She and others worked behind the scenes to get the amendment reintroduced through the 1940s and 1950s.

LEAGUE ANNOUNCES ITS NEW BOARD OF DIRECTORS

May 2022 marks the new fiscal year for the League of Women Voters of Southern New Mexico, headquartered in Las Cruces.  And, with each new year, new members of the Board of Directors are elected while some continue in their existing terms of office.  It is the League’s honor to announce the Board for 2022/2023:

Co-Directors of Voter Services:  elected to two-year terms are Dale Yeo of Las Cruces and Catherine Cochrane of Silver City; 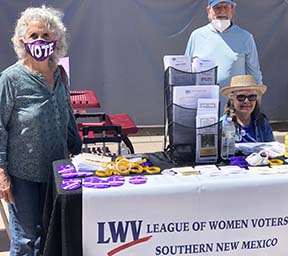 The celebration was sponsored by the Southern New Mexico Women’s Suffrage Alliance (which includes the League of Women Voters), which represents several organizations throughout the county, and by the City of Las Cruces.  There were also a variety of tables where information was distributed to attendees.

Women’s History Month, recognized in March, celebrates women who paved the way, and those who are still fighting for and representing women and women’s issues today, said Eileen VanWie, co-president of the League of Women Voters of Southern New Mexico.  Read More About the Event and See the Photos Here

CONGRATULATIONS TO THE NEW CITIZENS

Members of the League of Women Voters of Southern New Mexico attended a recent naturalization ceremony, where dozens of residents took their oaths to become United States citizens.  The ceremony was conducted by US Chief Magistrate Judge Carmen Garza. 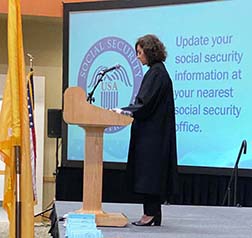 The naturalization process also involves a test by the prospective residents regarding their knowledge of the USA and its governance.  The men and women who were granted citizenship were from many countries throughout the world. 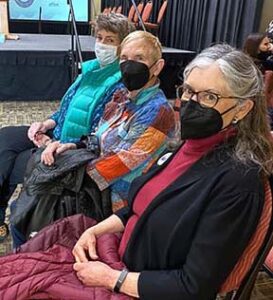 Pictured at far right is US Magistrate Judge Carmen Garza;  Attending from the LWVSNM are (left to right) Mary Flynn, Treasurer; Dale Yeo, Director of Voter Services; and Kathy Brook, Co-President.  Behind the camera was Co-President Eileen VanWie.

Mary Carter of Anthony, NM, has been selected as the 2022 recipient of the Making Democracy Work Award from the League of Women Voters of Southern New Mexico (LWVSNM).  Carter, the executive director for the Women’s Intercultural Center in Anthony, implemented a citizenship program to educate, empower and help people who have been referred to the Center for assistance.  League Co-Present Eileen VanWie said “the award is given to an honoree who has contributed to strengthening our democracy.”

Leagues across New Mexico have been monitoring the redistricting process that will go before the NM Legislature in the coming days.  The presence of an independent redistricting commission (CRC) for this cycle has increased anticipation that the upcoming legislative session may produce a better process and outcomes. Some results are now available from the 2020 New Mexico Redistricting Survey, which was aimed at providing policymakers, advocates, and the wider public with valuable information about how the electorate in New Mexico views the redistricting process.

Click here to read some of the major findings.

The League of Women Voters of Southern New Mexico (LWVSNM) holds hybrid meetings for its organization. The regular meetings are generally held on the second Saturday of each month at 2:00 p.m. via Zoom.  However, on occasion, the meeting will also be on Zoom and in-person.  When in-person meetings are held, they are located at the Good Samaritan Society Creative Arts Room on 3011 Buena Vida Circle.

The League continues to welcome new members.  Membership dues for one-half year (November through April) are only $32.50.  (Students 16 years and older can join for free.) For more information about the meetings or to join the League, contact lwvsnm@gmail.com.

LOCAL LEAGUE BOARD and OFFICERS

In 2021, the 107 female and male members of LWVSNM adopted the Eileen VanWie philosophy known as JEDI (Justice, Equity, Diversity and Inclusion).  JEDI is the foundation of all League activities, ranging from voter services to supporting education and youth engagement. The LWVSNM studies and advocates for selected issues that expand voting rights for all citizens and social justice for all residents.

A new video from specialists at the US Census Bureau helps citizens understand how the census will be used in New Mexico’s redistricting.  See the video here.  Following each census, the state of New Mexico undergoes redistricting.  This is an important task that involves community input.  The Fair Districts New Mexico organization – a nonpartisan group that includes a cross-section of residents throughout the state – developed a short video to help citizens understand the proposed redistricting reforms.  Click here to watch that video.

You can read about the state’s Citizen Redistricting Committee’s most recent work here: https://www.nmredistricting.org/

The League of Women Voters of Southern New Mexico (LWVSNM) announced that a comprehensive directory of elected officials from Doña Ana County has been updated to reflect the outcome of the Nov. 3, 2020 General Election. The updated Who’s Who is available to download. The previous 2020 Who’s Who of Elected Officials with officials whose terms end Dec. 30, 2020, can also be downloaded. Copies of the directories are also located on the LWVSNM website or can be picked up at Branigan Memorial Library, City Hall and the County Government Center.

“For over 30 years, the League has produced Who’s Who to promote communications with the elected public officials who serve us,” Brook said.  “During that period, it has expanded considerably to include officials in Anthony, Hatch, Mesilla, Sunland Park and soil and water conversation districts, as well as Las Cruces and Doña Ana County.” Brook said the directory includes phone numbers, email addresses, as well as website addresses for elected officials.  In addition to county positions, such as County Commissioners, Clerk, Sheriff, Treasurer and Assessor, the directory includes federal officials such as the President and Vice President, Congressmen and the U.S. Senators. State positions from the Executive Branch include the Governor, Lt. Governor, Secretary of State, Attorney General, and members of the Governor’s Cabinet, among others.

“The League is a non-partisan organization that does not support or oppose any candidate. Once candidates are elected, it’s important to get this information into the hands of all residents,” said Eileen VanWie, LWVSNM Co-President. “This directory is a way to keep communication transparent for the electorate.”

The 18-page directory also has contact information for the Las Cruces City Council, the three School Boards in the county, state and local judges, several state commissions, plus the managers for the local governments.

For more information about the Who’s Who Directory, or to obtain a copy, contact Brook or VanWie at lwvsnm@gmail.com or 575-524-VOTE (8683).

Keep up to date

A DIRECTORY OF ELECTED OFFICIALS

Get to know your government!